After the Pentagon planned a series of summer military exercises in the South, conservatives accused the federal government of enabling either a foreign invasion or some kind of military coup. The military futilely protested that the presence of foreign military observers was standard procedure and that all observers were from US allies. Several US congresspeople and state government officials called for the exercises to be cancelled.

While that may sound like a description of the conservative criticism of the Jade Helm 15 exercises planned for Texas this summer, it actually is a summary of a similar controversy in Georgia that riled conservatives more than fifty years ago. In 1963 the US military conducted “Operation Water Moccasin III,” a counter-insurgency exercise in the sleepy rural town of Claxton, Georgia. (Claxton’s town slogan: “The Fruitcake Capital of the World.”) One hundred and twenty-four foreign observers from allied nations attended, including Canada, France, and South Vietnam. The United States had been steadily expanding its involvement in the Vietnam conflict, so the exercise was timely.

Conservatives, however, feared that the exercises were really practice runs for a foreign invasion of the United States. Various versions of the conspiracy floated around, but US Congressman James Utt (R-CA) spread one of the most popular in a letter to his constituents. Utt imagined that Operation Water Moccasin was a rehearsal for a United Nations-sponsored takeover of the United States. 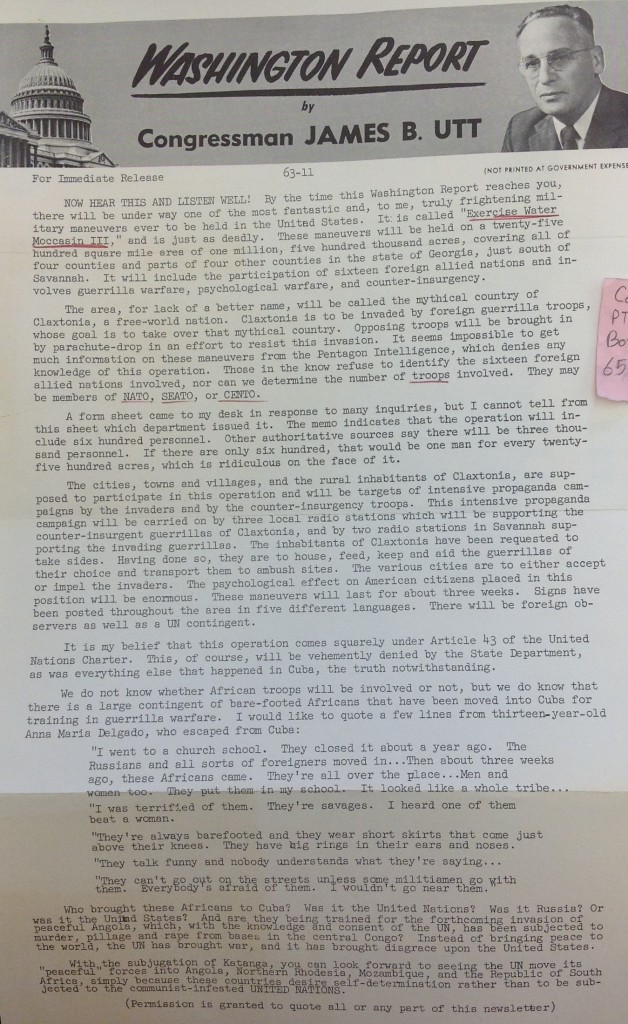 While it sounds frankly bizarre today, in the early 1960s conservatives feared that the John F. Kennedy administration was planning to phase out the US military in favor of a global United Nations peacekeeping force. Also, throughout 1963 the Kennedy administration lobbied for Senate confirmation on a Nuclear Test Ban Treaty that would restrict the number and kind of nuclear tests conducted by the US and the USSR. Thus in the summer of 1963 conservatives were on edge concerning the administration, the US military, and the United Nations. It was perfect fodder for conservative politicians, like Utt, with an eye on the 1964 elections.

Utt’s most inflammatory comments regarded the rumored inclusion of “bare-footed Africans” in the exercise. There was no evidence of such, but Utt cited the presence of African troops in Cuba undergoing training for guerrilla warfare as cause for concern. Utt was pandering to a radical conservative fringe. Notice that he lacked any hard information, but he nodded towards the concerns of paranoid anti-Communists. He suggested variously that the United Nations, the Soviets, or even the United States (!) might be responsible for the presence of African troops in Cuba. (As if the same Kennedy administration that had armed Cuban insurgents to overthrow Fidel Castro at the Bay of Pigs in 1961 was now sponsoring African troops in Cuba!) Without coming out and saying so, Utt validated conservative worries that these African troops were involved in Operation Water Moccasin. It’s really a piece of scaremongering art.

Utt also uttered some pretty obvious racial dog whistles. His thirteen-year-old Cuban-American correspondent described the Africans in Cuba as barefooted “savages” wearing “short skirts,” “big rings,” and “talk[ing] funny.” This “whole tribe” even “beat a woman.” Utt followed her description by suggesting that these troops would return to Africa to “murder, pillage, and rape.” It’s likely not an accident that violence against women figures so strongly in the letter; lynchings in America often began with accusations of sexual misconduct towards white women by black men. Utt evoked the idea that if these “savage” Africans abused women in Cuba and Africa, it could happen here too. Dog whistle indeed!

Now think about Utt’s words in the context of the civil rights struggle in Georgia in 1963. During the summer of 1963 civil rights activists in Savannah, Georgia–the closest major city to Claxton–held a series of demonstrations callings for the desegregation of restaurants, hotels, and movie theaters. Unlike the Birmingham demonstrations earlier that year, Savannah’s business and civic leaders adopted a conciliatory approach and the protests were relatively peaceful. Early in 1964 Martin Luther King Jr. gives an address in Savannah in which he calls it “the most desegregated city south of the Mason-Dixon line.”

That racial progress alarmed die-hard segregationists, providing fertile ground for conspiracy theories linking Operation Water Moccasin to civil rights activism. Some saw Operation Water Moccasin as a plan for a foreign invasion to start an insurgency among discontented blacks in the South. Indeed, versions of this conspiracy resurfaced routinely throughout the rest of the decade. Here’s a map produced by a Christian Right-wing group showing a “Negro Communist State to be Carved Out of the South.” The flyer went on to claim that unless conservatives acted now, “10 Million White People [would] be Driven From Their Homes to Make Room for Black Communist Soviet”! 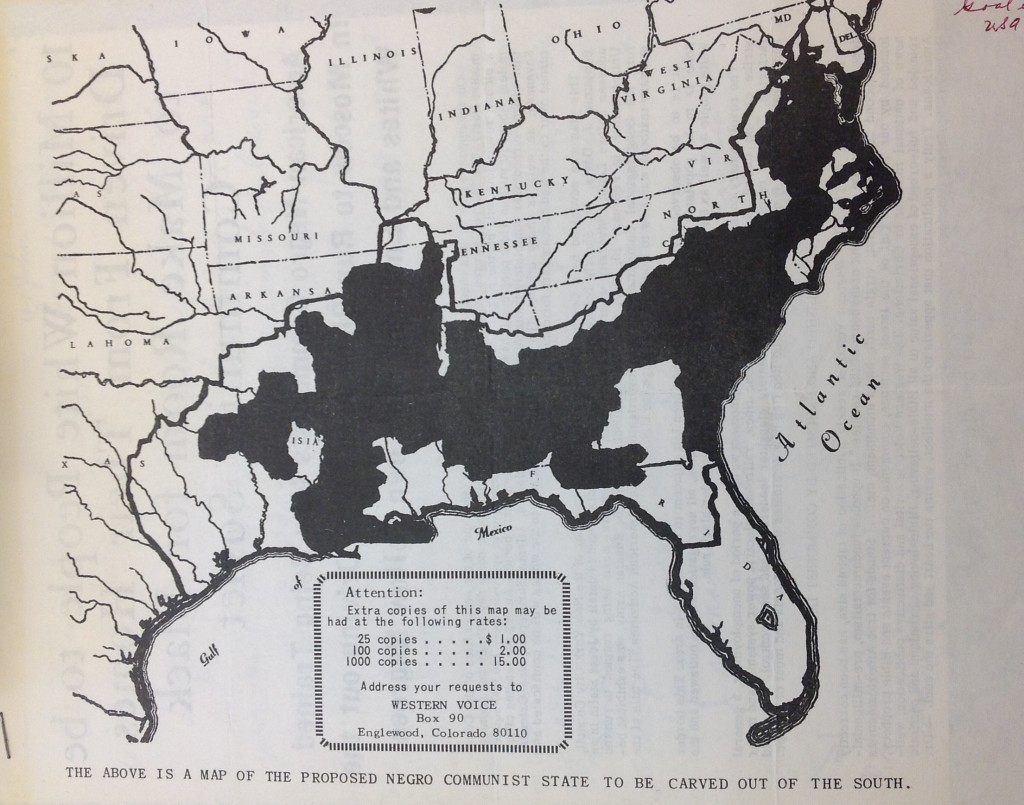 The current brouhaha over Jade Helm 15 follows the pattern of Operation Water Moccasin. Both sets of conspiracy theories began with relatively marginal groups on the conservative fringe. Both received wider attention when more mainstream politicians validated, or at least declined to invalidate, the theories. Both were, of course, hogwash. What’s especially interesting to me as a historian studying the New Right is that Jade Helm switches from the racial dog whistles of Operation Water Moccasin to nativist dog whistles. Fears of African men raping white women have been replaced by worries about Mexican immigrants as a fifth column or as a precursor to Chinese invasion.

All social movements have a paranoid fringe that generate extreme versions of wider concerns. Conservatives in 1963 worried about desegregation, but relatively few of them seriously thought that a United Nations-sponsored African invasion from Cuba was imminent. Likewise in 2015 conservatives worry about the effects of immigration from Central America, but I suspect that not many really buy into the Jade Helm conspiracy theories. Still, politicians are loathe to alienate even a small part of their base, especially when that segment is particularly motivated and loud. It’s easier to try and chart a middle path by pandering to the fringe without formally committing to the conspiracy. Bravery is only infrequently a virtue for politicians.