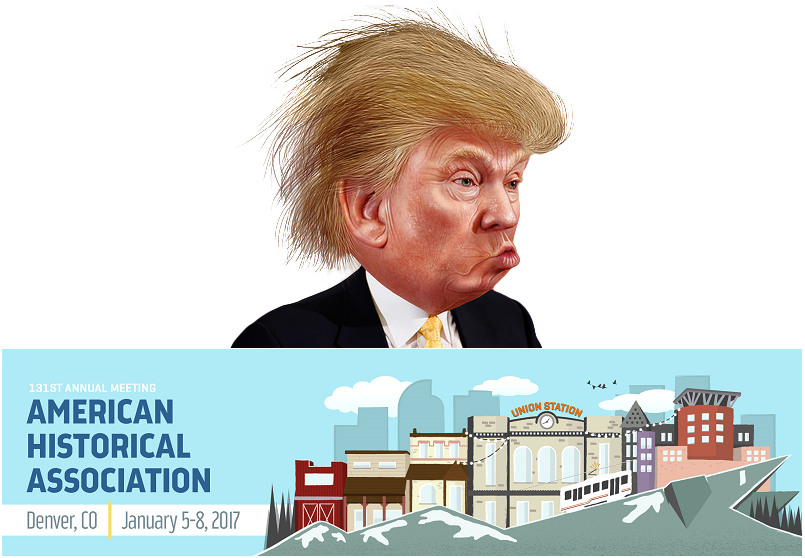 Last Tuesday featured an odd juxtaposition in my little corner of the academic world. I’m a modern American political historian, among other things, so I pay close attention to topics that I might write about later in my career. Possible future monograph titles ranked from least to most depressing:

Trumpmania: How America Lost Its Mind in 2016 But Regained It In 2020
The Passage of Power: The Years of Donald Trump
The Rise and Fall of Trumpism

But within hours of hearing about Trump’s win in the Indiana Republican primary and the subsequent suspension of Ted Cruz’s and John Kasich’s campaigns, I also received word from the program committee of the American Historical Association. They accepted a panel I had organized along with Michael McVicar, Nicole Hemmer, Heather Hendershot, and Kevin Kruse.

Our panel title is “Supplying Conservatism: Media Infrastructure and the Rise of the New Right.” There was something oddly poetic about having our panel on the rise of the New Right fifty years ago accepted even as we watched the movement implode in real time.  Maybe. (I’m a historian; give me at least 20 years to figure it out.) If the Republic falls before then, a member of the panel has suggested that we escape to the Colorado Rockies and join the resistance a la Red Dawn.

Anyways, if you are planning on spending January 5-8, 2017 in balmy Denver, let me know and we can get coffee.

“Supplying Conservatism: Media Infrastructure and the Rise of the New Right”

In the two decades since Alan Brinkley called conservatism the “orphan” of political history, scholars have responded by looking for the primary issue(s) which ignited Right-wing activism in the mid-twentieth century. Yet while hot button issues are necessary to rouse support, they are by themselves an insufficient cause. There are always means, media, or institutions around which movements coalesce. To put that in other terms, historians often explain the rise of the New Right by looking at shifts in the demand for conservative ideas. Yet changes in the supply of those ideas were equally important to the rise of modern conservatism. This panel focuses on the media infrastructure of the New Right. Radio, television, paperback publishing, and private intelligence agencies forged scattered conservatives into a national movement.

As Paul Matzko shows in “Polish Ham, Talk Radio, and the Rise of the New Right,” conservative radio broadcasting in the early 1960s stimulated grassroots activism. In one instance, broadcaster Carl McIntire condemned the John F. Kennedy administration for allowing imports from Communist Eastern Europe; a large group of his listeners, mostly housewives, organized boycotts of stores selling Polish hams and other goods. As amusing as the incident sounds in retrospect, it was no laughing matter for the Kennedy administration as detailed in internal White House memoranda.

Anti-ham housewives were an irritant during the 1962 midterm elections, but during the 1964 election season Lyndon Johnson’s presidential campaign encountered a flood of cheaply-produced, best-selling conservative paperback books. Nicole Hemmer, in “’Hatchets with Soft-Covered Sheaths,’” details the surprising success of these campaign paperbacks, which despite being authored by little known grassroots activists managed to sell upwards of 16 million copies via an informal network of Right-wing publishers and marketing outlets.

Michael McVicar, in “Surveillance—Dossier—Exposé,” reveals a darker side to the campaign to put a conservative in the White House. Using do-it-yourself manuals, Right-wing activists created private intelligence agencies that compiled dossiers on Left-wing politicians and activists. Their goal was to expose embarrassing connections between the Left and Communist front organizations. The anti-Communist paranoia of the 1950s had been democratized, commodified, and placed in the hands of grassroots activists.

Despite a self-imposed distance from grassroots activism, even conservative intellectuals like William F. Buckley needed a way to circulate their ideas. In “Firing Line,” Heather Hendershot describes how Buckley used his television program to create a more cerebral strand of the New Right. Grassroots activists are adept at disruption, but Buckley gave the movement an intellectual foundation on which to build a more sustainable movement.

By the 1960s, New Right activists could access conservative ideas in new ways, whether on the car radio on the way to work, as a family gathered around the television set at night, reading a campaign paperback in bed, or writing in to a private intelligence agency for information on a local political candidate. The expansion of the media infrastructure of the New Right enabled new forms of conservative, grassroots activism which would dramatically reshape national and party politics.