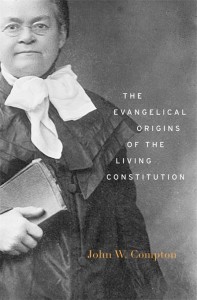 One thought on “The Evangelical Origins of the Living Constitution – John W. Compton”