I was reviewing my archival research and came across this cover from Teach (“The Sunday School Idea Magazine”). 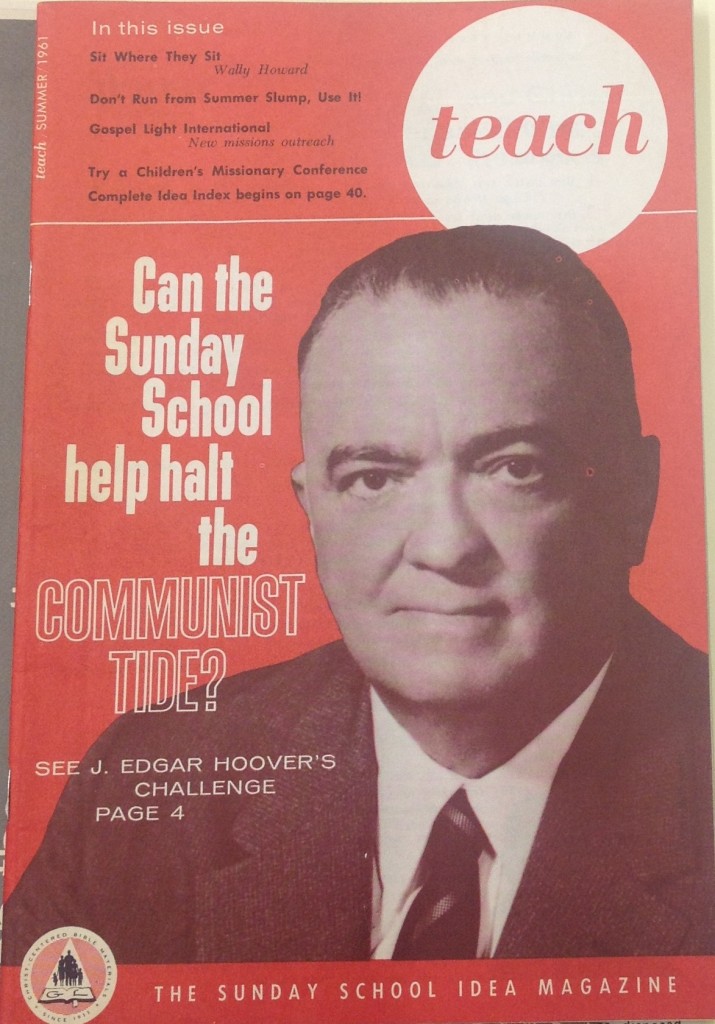 The rhetorical question is more than a bit silly. But J. Edgar Hoover took a break from illegally wiretapping civil rights groups to contribute an article. Hoover served up his usual strong dose of civil religion; Christianity had value because it inspired “moral idealism” in America’s youth, protecting the US against Red subversion.

What’s interesting to me about documents like this is that they show the extent to which anti-Communist rhetoric pervaded the post-World War Two cultural and political consensus. Democrats and Republicans competed to see who could be most vociferous in their condemnations of Communism. Everywhere you looked you’d see anti-Communist material, from refrigerator advertisements to graphic novels. It was so pervasive that it became kind of meaningless, just a part of the rhetorical background. (Albeit a “meaninglessness” that could bite. Just ask anybody blacklisted at the time.)

I’m not sure there’s a perfect corollary today. Maybe think of it as the mid-twentieth century version of contemporary consumer environmentalism. You’d be hard pressed to find a major American corporation today that doesn’t give at least lip service to conservation. A few years ago, Poland Spring announced thinner plastic bottles to save the earth. The bank I used to work at changed it’s slogan to “Go Green!” and instituted a cap on our monthly printing. Even oil companies pay for lavish pro-environment ad campaigns. It’s generally just posturing. They dress up moves to help the bottom line as altruism.

The major difference between then and now is that while environmental conservation has reached peak cultural consensus, it hasn’t created the kind of political consensus that backed anti-Communism during the Second Red Square. We don’t have a House Un-Environmental Activities Committee subpoenaing testimony from polluters. Oh, wait. Still, the point stands, I think.