I recently heard Keith Urban’s new song, “John Cougar, John Deere, John 3:16.” It’s got a catchy tune and the title makes a great lyrical hook. The title itself evokes several recurrent themes in country music. John Deere is symbolic of grit, farm/country life, and general Americana. Many (too many?) country songs make the pickup truck that central symbol, but a John Deere tractor works just as well. Sandwiching our tractor is John Cougar (Mellencamp), an avatar of rock n’ roll rebellion, and John 3:16 as a reference to evangelical religiosity.(1) In any case, pick one or two of those three themes and you’ve pretty much summarized any American country song.

Which makes it deeply odd that Keith Urban sings it. He was born in New Zealand and spent his teenage years in Queensland, Australia. After minor success as a country singer Down Under, he moved to Nashville and to much greater success in the States. Indeed, as long as you only listened to his music, you wouldn’t know from his accent that he wasn’t born in America. This is a fairly common pattern, see Russell Crowe, Mel Gibson, and Nicole Kidman (Urban’s wife).

Still, it’s strange when Urban sings about quintessential American experiences that he never had. He couldn’t have been a “blue jean quarterback saying ‘I love you’ to the prom queen in a Chevy” because he would’ve been playing rugby and gone to a school formal. Australia did have John Deere by the time Urban was born, but via a merger with the more traditional Australian tractor company Chamberlain. And in Australia Urban would’ve been more likely to drive around in a ute rather than a pickup truck (and it probably would’ve been a Ford, Toyota, or Subaru rather than a Chevy). It’s self-explanatory why it’s odd for him to refer to the Mississippi, Mark Twain, Hemingway, Wheel of Fortune, and Texaco.

Of course, Urban didn’t write the song and, as he’s said in interviews, he absorbed a great deal of American culture from exported film, television, and music.(2) And it’s certainly true that America doesn’t own a monopoly on music celebrating place, family, and tradition. This post isn’t meant as a criticism of Urban; it is an opportunity to mention some of the distinctions between American and Australian country music.

But really I just want to talk about my favorite Australian country singer, John Williamson. I spent eight summers in Australia as a teenager. Two nuffy (good) mates introduced me to Williamson and I immediately fell for what seemed like a very exotic blend of influences for someone with very little exposure to global popular music. 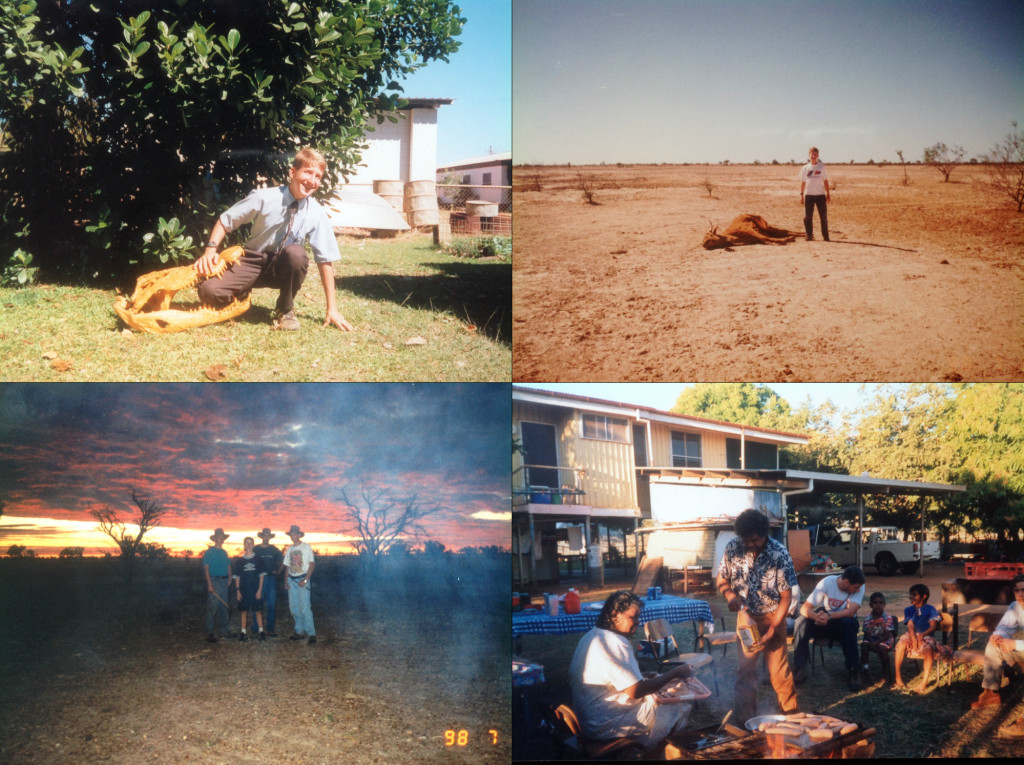 Visiting the Outback in 1998

The first thing I’d like to note is that in Australia, country music and folk music aren’t the almost completely distinct genres that they are in America. In the States, contemporary country music is strongly rock and pop influenced, plugged in, and rarely references anything pre-WW2. Folk music, on the other hand, eschews “over-produced” sound, roots itself in the blues and pre-WW2 country, and is the preserve of the hipsters and progressives who listen to NPR. (Full disclosure: my wife is a volunteer host for “The Folk Show.” I myself have a hermit beard and have been known to wear flannel year round.) American artists have played with the line between the two genres from time to time especially during the first folk revival (think Bob Dylan) and the second (think Mumford and Sons), but these moments are the exception that prove the rule.

In Australia, country and folk overlap more. John Williamson is a perfect example. Williamson usually performs on acoustic guitar, but he’s not averse to plugging in for albums. You’ll hear lots of harmonica and didgeridoo. He writes most of his own songs, which cover quite a few topics from early twentieth century Australian history. You’ll hear that mix in many of the examples of Williamson’s music that I’ll mention below, but you can certainly see it in his first hit single from 1970, “Old Man Emu.”

It’s not uncommon for Williamson to use the didgeridoo in his tracks and his embrace of the traditional aboriginal instrument indicates his wider advocacy for aboriginal rights. Even from my short time in Australia as a white man, I routinely overheard offensive sentiments about aboriginals. Imagine that all the animus in America towards blacks AND Native Americans was focused on one group and you’ll have some idea of what Australian aboriginals face. Which makes Williamson’s support for the aboriginal music scene all the more remarkable. American country music isn’t exactly known as a bastion of civil rights activism let alone for possessing any appreciation of Native American culture and music.

Like in America, Australian country music is deeply nationalistic. That nationalism is complicated however by Australia’s status as a member of the British commonwealth. Queen Elizabeth the Second is ceremonial head of state for Australia, albeit one with very little political power. That gives Australian nationalism a bit of bite that is lacking in American patriotic songs. Take John Williamson’s ardently republican “A Flag of Our Own,” in which he advocates for replacing the Australian national flag with its embedded British flag. The song just drips of Australiana. Framing story that appeals to beloved national hero? Ned Kelly, check. Epithets for foreigners? “Frogs,” “POMs,” “Yankees,” check, check, and check. And all are rooted in specific foreign policy clashes between Australia, Britain, France, and the US during the early 1990s. Like I said, this has way more bite than rather anodyne American songs like “God Bless the USA.”

“A Flag of Our Own” includes a touch of another motif in Williamson’s music: the importance of environmental conservation. One of my favorite songs is “Rip Rip Woodchip” in which Williamson describes the shortsighted, unsustainable destruction of Australian forests. It expresses a conservationist rather than preservationist ethos with its nostalgia for 19th century woodcutters, but it’s unlike anything in mainstream American country music.

Finally I’d like to touch on what I believe is a significant source of the difference between Australian and American nationalisms. For both nations country music is the musical expression of nationalist sentiment, a feeling that naturally flows into appreciation for the military service of their veterans. But the two nations have had very different encounters with war. American songs celebrating military service tend to highlight our victories over fascism and communism while downplaying colonial misadventures and defeats. Australians are much more attuned to the dark side of war.

Here’s a simple comparison that might help us understand the distinction between these national experiences. Ask an American about the most important moment in American military history and there’s a pretty good chance they’ll mention the D-Day landings in Normandy. American soldiers stormed the beaches while suffering awful casualties, but they successfully broke through Hitler’s “Atlantic Wall.”

Australians on the other hand also remember a beach landing, albeit one with a very different outcome. At the behest of over-confident British officials(3), some 78,000 Australian and New Zealand soldiers (ANZAC) landed at Gallipoli in an ill-advised attempt to knock the Ottoman Empire out of the war. The landings were a disaster as initial efforts became bogged down in the same kind of trench warfare that bedeviled the Western Front. Except at Gallipoli the allied soldiers were less well-supplied, had less artillery, and were fighting in much more rugged terrain. The generals just kept pouring more and more reinforcements into the meat grinder. After eight months of brutal fighting and more than 141,000 ANZAC casualties, the Allied forces withdrew in defeat. To put that in perspective, Australia suffered approximately the same number of battlefield deaths during WW1 as the United States despite having less than 1/18th the total population.

What does that kind of tragedy do to a nation’s remembrance of war? Well, they still celebrate their veterans just as vigorously but without the assumption that their soldiers died in the defense of Australia. Those young “Diggers of the Anzac” died instead in the service of a callous British government.(4) Instead of focusing on the “goodness” of the war, Australians honor the personal bravery and integrity of its soldiers. Under horrible conditions, these men fought for each other even as the generals sent them over the top into almost certain death.

Those themes–individual heroism, soldierly comradery, all in the service of a questionable cause–are the subject of several Williamson songs, including “Diggers of the ANZAC.” Notice the mention of “men like Simpson,” a reference to Jack Simpson Kirkpatrick. Although his story quickly became myth, the real Simpson was a hero who ferried some 300 wounded soldiers down the steep cliffs at Gallipoli on the back of his trusty pack-mules before being shot in the back less than a month into the battle.

(1)  The sinner and saint juxtaposition is common in country songs and this song highlights that tension. What more perfect pairing than the personification of concupiscence, Marilyn Monroe, with the state of original innocence in the Garden of Eden??

(2) Hey, it’s a fact of empire from Hellenism through to Pax Americana.

(3) Including Winston Churchill, who was the rather strategically incompetent, warmongering First Lord of the Admiralty. I share the general Australian contempt for the man. American conservatives idolize him, but then Americans do tend to be as ignorant of WW1 as they are fixated on WW2, a weighting that works in Churchill’s favor.

(4) British officialdom never comes out looking good in Australian films and television. Here’s a clip of a young Mel Gibson in his first major movie role. Note the individual heroism and British incompetence. It’s as emotionally brutal an end to a film as I’ve seen. This quote from Gibson’s press tour does a nice job summarizing Australian cultural memory of the battle: “Gallipoli was the birth of a nation. It was the shattering of a dream for Australia. They had banded together to fight the Hun and died by the thousands in a dirty little trench war.”