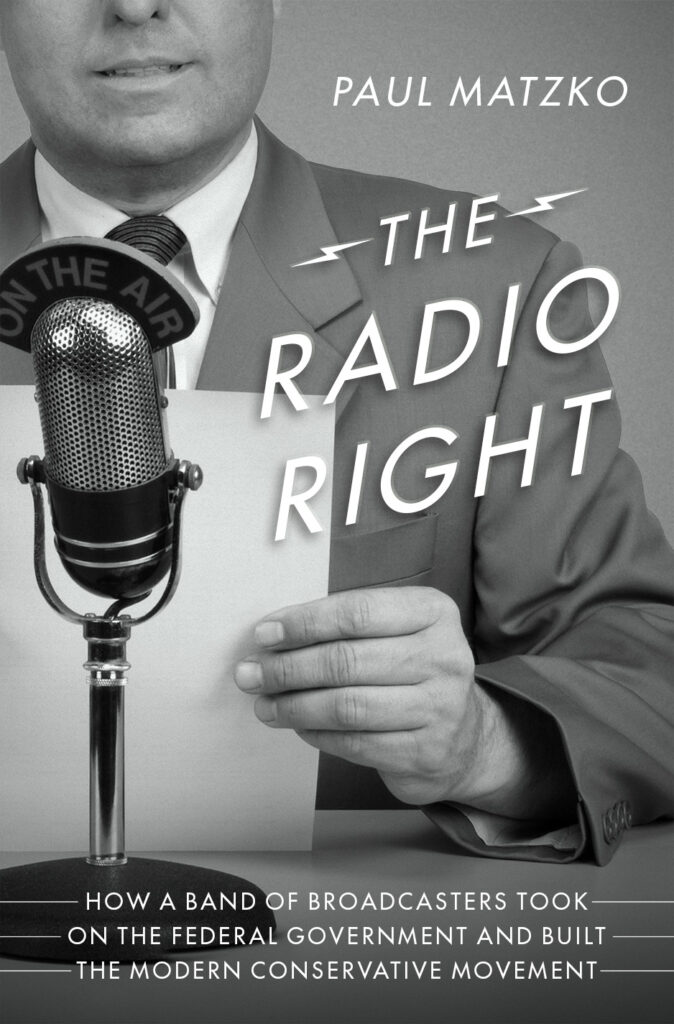 Despite some COVID-19 induced delays, the hardcover edition of my book will be released in June 2020 by Oxford University Press. The Kindle version is already available for purchase for just $14.57! And an audio book is being released in October.

In the past few years, trust in traditional media has reached new lows. Many Americans disbelieve what they hear from the “mainstream media,” and have turned to getting information from media echo chambers which are reflective of a single party or ideology. In this book, Paul Matzko reveals that this is not the first such moment in modern American history.

The Radio Right tells the story of the 1960s far Right, who were frustrated by what they perceived to be liberal bias in the national media, particularly the media’s sycophantic relationship with the John F. Kennedy administration. These people turned for news and commentary to a resurgent form of ultra-conservative mass media: radio. As networks shifted their resources to television, radio increasingly became the preserve of cash-strapped, independent station owners who were willing to air the hundreds of new right-wing programs that sprang up in the late 1950s and 1960s. By the early 1960s, millions of Americans listened each week to conservative broadcasters, the most prominent of which were clergy or lay broadcasters from across the religious spectrum, including Carl McIntire, Billy James Hargis, and Clarence Manion. Though divided by theology, these speakers were united by their distrust of political and theological liberalism and their antipathy towards JFK. The political influence of the new Radio Right quickly became apparent as the broadcasters attacked the Kennedy administration’s policies and encouraged grassroots conservative activism on a massive scale.

Matzko relates how, by 1963, Kennedy was so alarmed by the rise of the Radio Right that he ordered the Internal Revenue Service and Federal Communications Commission to target conservative broadcasters with tax audits and enhanced regulatory scrutiny via the Fairness Doctrine. Right-wing broadcasters lost hundreds of stations and millions of listeners. Not until the deregulation of the airwaves under the Carter and Reagan administrations would right-wing radio regain its former prominence. The Radio Right provides the essential pre-history for the last four decades of conservative activism, as well as the historical context for current issues of political bias and censorship in the media.

“Challenging the conventional wisdom of 1960s political history, The Radio Right not only shows how far-right broadcasters laid the grassroots groundwork for modern conservatism but also chronicles how the liberal establishment–from the Kennedy administration to the National Council of Churches–worked feverishly to fight them.” — Kevin M. Kruse , co-author of Fault Lines: A History of he United States Since 1974

“In the current climate of divisive social media and polarized cable news, it is tempting to romanticize the network era as a halcyon moment of ‘fair and balanced’ political media. Of course, that moment never really existed, as this wonderful, meticulously researched book demonstrates. Matzko’s story of how the Kennedy administration pushed back against right-wing broadcasting in the 1960s helps us understand not only the past but also, importantly, the present.” — Heather Hendershot, author of What’s Fair on the Air: Cold War Right-Wing broadcasting and the Public Interest

“In Radio Right, Paul Matzko masterfully tracks the ascent of conservative radio in the early 1960s, subsequent efforts by John F. Kennedy to quell this rising tide, and the long-term consequences of this bitter media war. Censored by liberal Democrats, radical right-wing voices cried foul, reorganized at the grassroots, then waited for their chance to fight back; we know the rest of the story. Thoroughly researched and sharply argued, this provocative and timely book is full of important (and surprising) insights that help us better understand how this nation’s fourth estate evolved into the polarized and polarizing entity we find familiar today. It also challenges readers to rethink the roots and contours of political censorship and the political Right in the age of Kennedy-and Nixon, Reagan, and Trump.” — Darren Dochuk, author of Anointed With Oil: How Christianity and Crude Made Modern America

“But beyond this, Paul also made some startling archival discoveries, showing how aggressively the White House had tried to suppress those activists, in an astonishing exercise of government power against an unpopular form of religious expression.” — Philip Jenkins, for The Anxious Bench

“Historian Paul Matzko’s well-researched and often terrifically entertaining new book, The Radio Right, provides a compelling, convincing, and closely observed “I Fought the Law” origin story for a religious-right media movement that lost the political battle of its first wave but ultimately won the ideological war.” — Steve Nathans-Kelly for the New York Journal of Books

“Perhaps most provocative is Matzko’s claim that these broadcasters helped lay the foundation for what would become the Southern Strategy, easing the transition of Dixiecrats into the Republican party.” – Jake Bittle for The New Republic

“Working through the massive amount of material needed to tell this story was unquestionably a tedious task for the author. It is thus especially remarkable that Matzko wrote such a lively, engaging book. For a more complete understanding of the conservative movement’s rise, including its more unsavory aspects, as well as the equally disturbing efforts to smother it in its infancy, I strongly recommend The Radio Right.” – George Hawley for Law & Liberty

“Matzko…wants to correct the customary account of conservatism’s origins, in which a gang of conservative intellectuals associated with William F. Buckley Jr. and his National Review magazine challenged the dominance of Northeastern liberal elites beginning in the late 1950s. This etiology, Mr. Matzko contends, gives too much credit to midcentury eggheads (my term, not his) and not enough to a group of scrappy right-wing radio broadcasters. … Matzko writes with clarity and wit.” – Barton Swaim for The Wall Street Journal

“The Radio Right is an impressively researched and lucidly written work of scholarship.” – from Barton Swaim’s Best Politics Books of 2020 list