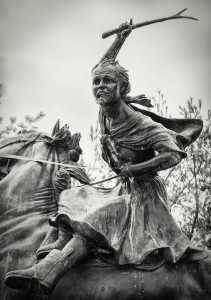 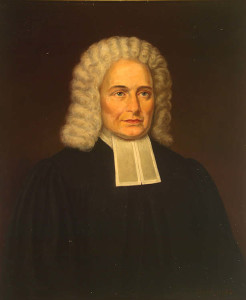 Samuel Davies played a significant role promoting the First Great Awakening among American Presbyterians in the 18th century. He fought for religious toleration in Virginia, preached a series of sermons in support of the British during the French and Indian War, and served as the fourth president of Princeton University. For extra details, here’s a link to my ARDA entry for Davies.

His reputation as a powerful preacher continued after his death into the 19th century and reprints of his sermons circulated widely. He was the “prince of preachers” long before Charles Spurgeon was born. Davies gave one of his final sermons to the students at Princeton on New Years Day 1761. The text was Jeremiah 28:16, “This year thou shalt die.” While exhorting the students to not waste what time in this life remained to them, Davies stated, “Perhaps I may die this year.” A month later, Davies was dead. They don’t make sermon illustrations quite like they used to!

Yet Davies’s most famous sermon was delivered while he was on a fundraising tour of Britain. As the story goes, Davies was called to preach in the royal chapel for King George II. When the king started whispering to others in attendance, Davies stopped talking, fixed his gaze on the King, and said, “When the lion roars the beasts of the forest all tremble; when King Jesus speaks, the princes of the earth should keep silence.” The chastened monarch later held a private audience with the bold minister, apologized, and donated some money which helped Princeton erect its first major building, Nassau Hall.

It’s a grand story and it’s easy to see why it was so often retold. What ardent republican in the early 19th century could resist a story about a native-born American bearding King George II in his own palace? It certainly would have gone down smoother after the American Revolution than, say, Davies’s eulogy to King George II–“George, the mighty, the just, the gentle, and the wise!”–upon the monarch’s death in 1761. After all, they had just fought a war with his ostensibly tyrannical, unjust, and foolish grandson, King George III.

However, the story of Davies and the King–coming to an Off Broadway show near you!–is a complete fabrication by an infamous 19th century booster of the Second Great Awakening, “Parson” Mason Locke Weems. He was an ordained Episcopalian minister until financial difficulties forced him out of the ministry. As an author and traveling book seller, Weems had a practical interest in compelling stories and didn’t let little things like evidence keep him from spinning tall tales. He specialized in well-selling biographies of prominent men like George Washington, Benjamin Franklin, and General Francis Marion. The heroes of the founding and the Revolution were starting to die off, first Benjamin Franklin (1790), then Francis Marion (1795), George Washington (1799), and many others.

Americans wanted to memorialize their departed national heroes, but they also wanted to see themselves in them. Weems’s tailored biographies were a particularly smart sales tactic in the 1800s and 1810s as the revivals associated with the Second Great Awakening broke out. America was rather suddenly more evangelical than ever before. Weems was happy to supply that demand by “evangelicalizing” the Founding Fathers. His versions of the historical figures prayed more often, acted piously at all times, and were conspicuously loyal to the idea of America as a nation specially chosen by God.

Weems is famously responsible for the fable of George Washington and the cherry tree. (Here’s a delightful painting by Grant Wood winking at the story by featuring Weems in the foreground pulling back the curtain on a surprisingly adult looking George Washington.) He also invented the story of George Washington praying at Valley Forge. Those are both famous examples, but Weems is likely also the author of the Samuel Davies sermon anecdote. Editions of Sermons on Important Subjects, by the late Reverend and Pious Samuel Davies, A.M. were routinely ordered by quite a multitude of booksellers in the 1790s and 1800s. In 1816 an edition was printed in Baltimore for “Mason L. Weems.” Prior editions did not include the anecdote, but Weems did and later editors imitated him. Despite attempts at debunking the story, the fiction was better than the truth. 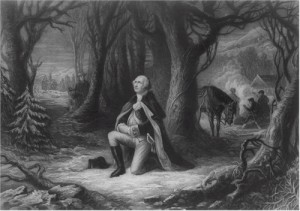 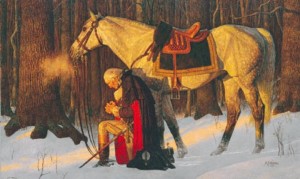 Weems’s anecdote has declined along with the memory of Samuel Davies. Myths about the Founding Fathers continue to circulate despite the efforts of historians to stamp them out–that’s a constant!– but few evangelicals today have ever heard of Davies and the political and religious milieu is no longer served by fanciful stories about his showdown with the King of England. Still, the episode is a reminder of the natural human inclination to invent and believe histories that are convenient to those causes which we hold dear.