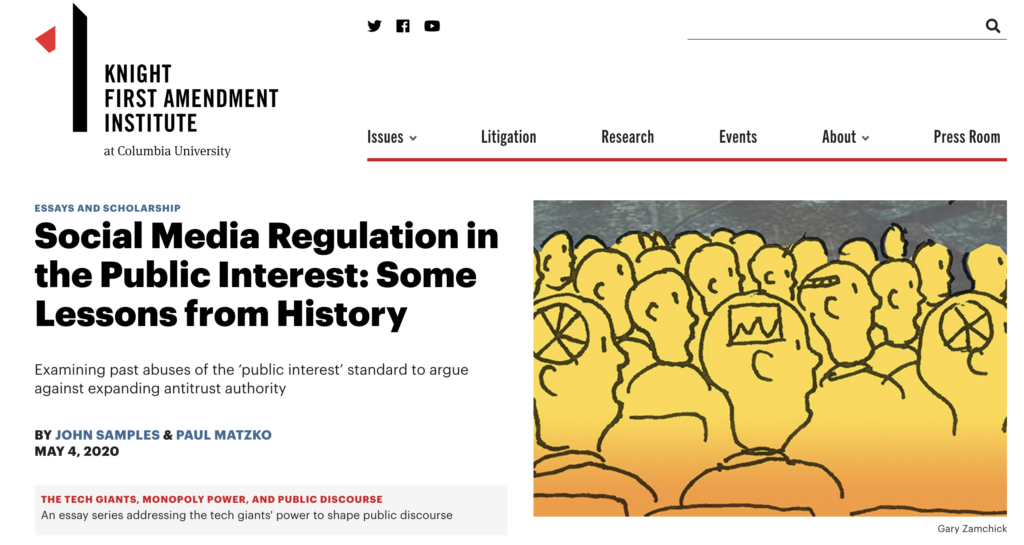 The Knight First Amendment Institute at Columbia University invited John Samples and I to contribute to an essay series discussing proposals for regulating the internet in order to save journalism, break apart Big Tech, and limit targeted advertising. Most of the participants were lawyers or journalists, with a baked in assumption that well-designed laws could reliably function as intended. It fell to John, who is a political scientist (and who has since been named to Facebook’s independent content moderation oversight board), and myself to remind the audience that the best laid regulatory plans of mice and men gang aft agley.

Indeed, embedded within the long history of broadcast media regulation–from Los Angeles muckraking preacher “Fightin’ Bob” Shuler’s clash with the public interest standard in the 1920s to the Kennedy and Nixon Administrations’ use of the Fairness Doctrine to suppress political dissent in the 1960s-70s–is a series of cautionary tales about the irresistible temptation for those with political power to use media regulation to gain partisan advantage or to advance narrow ideological interests. If it was true of radio and television regulation, we should expect it to be true of social media and internet regulation.

Here’s an excerpt from the essay, but be sure to head over to the Knight Institute’s website to read the entire thing and then check out the companion pieces.

The historical episodes we have discussed demonstrate the problem of mainstream apathy towards the suppression of radical speech. Bob Shuler, although a Republican, had alienated both the Republican and Democratic parties on the local level, leaving him with few political allies to speak for him when the FRC revoked his radio station license. Socialist radio station owners fought similar pressures from both Republican and Democratic FRC commissioners in the 1930s. Right-wing broadcasters in the 1960s, targeted by the Kennedy administration and the DNC with the Fairness Doctrine, quickly found that Richard Nixon had no interest in helping radical conservatives who had attacked his China policy.

Hawley’s Ending Support for Internet Censorship Act is likely a stillborn effort to regulate content online. And perhaps other proposals will avoid these free speech issues, but history suggests otherwise. If the government is empowered to advance the public interest online, it will necessarily affect the moderation decisions of private companies. Given our current polarized politics, a handful of newly empowered public officials are likely to view Facebook similarly to how Richard Nixon saw CBS News: as an opportunity to extract political rents.