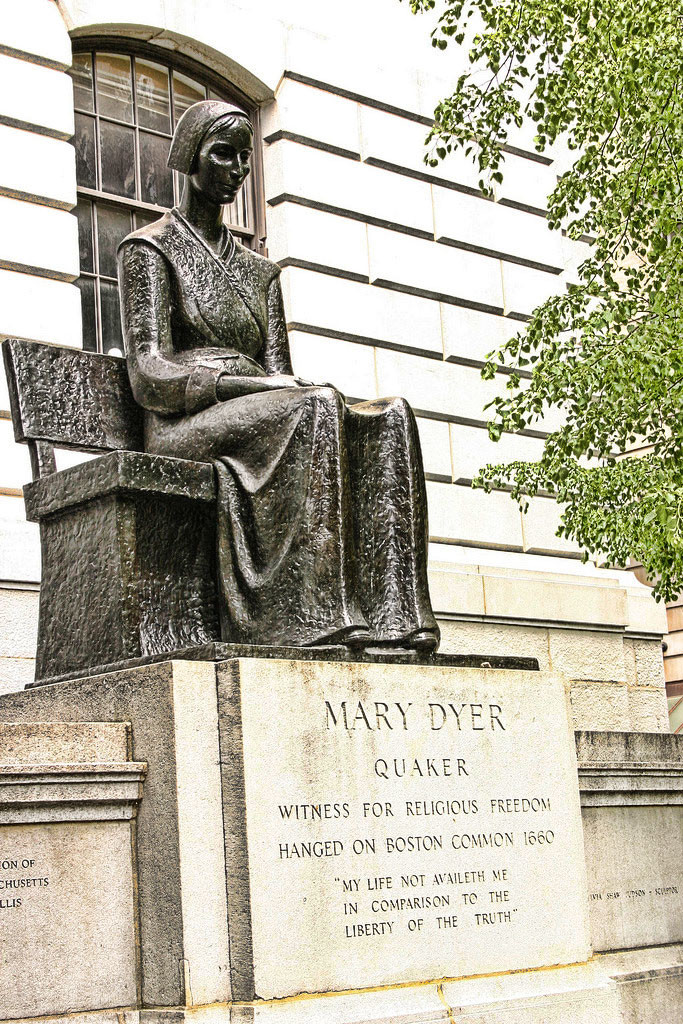 Puritans were no more dour, provincial, or narrow-minded than anybody else. That caricature was created much later by the likes of Nathaniel Hawthorne and HL Mencken. Hawthorne’s The Scarlet Letter tells us more about the theological controversies of the 19th century than it does the 17th century. And when Mencken pithily defined Puritanism as “the haunting fear that someone, somewhere, may be happy,” he was really criticizing religious conservatives of his own day. In reality, early American Puritans were an unusually cosmopolitan, well-educated lot. Take Henry Vane, who was educated at Oxford and worked for the English ambassador in Vienna before traveling to Massachusetts and serving a term as governor.

Unfortunately, Hawthorne and Mencken didn’t have to work too hard to create their caricatures. Puritans gave critics plenty of ammunition, especially in regards to the entanglement of church and state in the Massachusetts Bay Colony. It doesn’t take more than a few hanged Quakers or burnt “witches” to make one thankful for religious toleration.

Let’s consider for a moment the story of Mary Dyer and her “monstrous birth.” Imagine that you’re a young mother (~26) who has just given birth to a stillborn daughter with anencephaly and obvious physical deformities. You bury her secretly because at the time deformed children are seen as signs of God’s displeasure. Your religious and political opponents pressure a friend into telling them where your daughter was buried. Then the civil authorities exhume your child without permission, write up a description of her deformities, mail copies to every minister in your area, and further publish a book that uses her as proof that you are under God’s judgement for your religious beliefs. All of this is done in order to bring your good friend to trial and banishment.

John Winthrop exploited the pain of a traumatized woman for political gain on the basis of questionable theology.

Winthrop leveraged the political controversy into a successful bid for the governorship and banished Dyer. She went to England and became a Quaker. When she returned to Massachusetts twenty years later, Winthrop was dead, but his successor and political ally, John Endecott, had enacted a ban on Quakers in the colony punishable by death. He hanged Dyer from an elm tree. Other Quakers were whipped, had their ears shaved off, and their tongues bored through with a hot iron. Like I said, Hawthorne and Mencken didn’t have too work too hard to construct their caricatures.

I’m no Quaker, but given the circumstances I find myself of one accord with Dyer’s last words. After she watched two other Quakers hanged, she approached the ladder to the gallows. One of her former pastors, John Wilson, called on her to repent and save her life and she replied, “Nay, man, I am not now to repent.” She was then asked if she wanted some of the church elders present to pray for her soul, to which she gave the biting answer, “I know never an Elder here.” Indeed.

I have a short moral for this story. There has been a revival of interest in Reformed theology among conservative evangelicals over the past two decades. Evangelicals are suddenly reading Puritan divines like John Owen. Yale University Press has been steadily publishing the complete works of Jonathan Edwards. You can even buy a t-shirt emblazoned with “Jonathan Edwards is my homeboy.” (That said t-shirt is made of the finest “organic cotton” is no small irony. Ahem.)

Yet while this embrace of Puritan theology and history is heartening, it has been selective. We read Edwards, not John Cotton. Owen, not Cotton Mather. When Winthrop is mentioned it’s usually some imagination-deprived politico spouting off about America as a “city upon a hill.” Winthrop’s scurrilous attacks on a grieving mother? Yeah, that’s been forgotten. This selective reading of American Puritanism prevents evangelicals from learning from Puritan vices as well as their virtues. Jonathan Edwards and other Puritans have rightly been taken to task for their ownership of slaves, but who speaks for Mary Dyer?

A group of Puritan religious dissenters fled England for the sake of their religious freedom, a freedom they then denied to Baptist and Quaker dissenters. For sure, the entangling of church and state was an older mistake, but age did not impart one whit of grace to the harm that necessarily resulted from using the sword of the State to advance the Church. While erecting their city on a hill, Puritans forgot that they were strangers in a strange land. If contemporary evangelicals better understood their Puritan past, perhaps they would be less likely to repeat their mistakes.