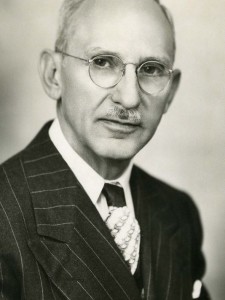 Flower was an influential voice within pentecostalism. He was one of the youngest representatives present at the formation of the Assemblies of God in Hot Springs, Arkansas in 1914. He served in a variety of executive posts within the nascent denomination and played a vital role in its “evangelicalization.” During his career, the Assemblies moved away from its historic support for pacifism, softened its stance on speaking in tongues as a necessary sign of salvation, and engaged more broadly with other evangelical denominations. Indeed, the Assemblies of God was the largest denomination to join the National Association of Evangelicals in the 1940s and it saved the organization from financial collapse multiple times. Flower brought pentecostalism into the evangelical mainstream.

The choice of Flower is interesting because Bob Jones University eventually withdrew from broader evangelicalism and also became increasingly critical of pentecostalism. Take, for example, the position advocated in a 1989 book published by BJU’s press, Pentecostalism: Purity or Peril? (Hint: These kinds of books always put the correct answer second.)

But that future would’ve been unimaginable to students at Bob Jones College in the 1940s. Bob Jones Sr. was a founding member of the National Association of Evangelicals. He was even then embroiled in a competition for students with the archly-fundamentalist Wheaton College. When Wheaton President J. Oliver Buswell attacked Bob Jones College for putting on “worldly” operas and Shakespearean plays, Bob Jones Sr. responded with a ringing call for Christian liberty of conscience. A betting man would have put his money on Bob Jones College as the future flagship institution for this new form of evangelicalism. And he would’ve lost every penny.

Flower’s visit to Bob Jones College is a reminder of how fluid the state of evangelicalism was in the 1940s. The labels and lines that are familiar to contemporary evangelicals and fundamentalists would not harden for at least another decade.

In our quarterly letter dated March 1 we stated that prejudice against the Assemblies of God is melting perceptibly. It is possible to mingle with others without compromise and to gain respect for our Christian testimony. Recently, the writer had the opportunity to prove this statement. He was given the privilege of visiting Bob Jones College at Cleveland, Tenn. during its Commencement exercises. Both Bob Jones Sr. and Bob Jones Jr. were most cordial and friendly….

Bob Jones was reminded that a short time ago he had spoken in one of the Assemblies of God in Seattle, Wash…. He said that when the time came for prayer, an intelligent, cultured woman began to pray in an unknown tongue. When she had finished, a man, well dressed, intelligent, said, “I will interpret,” and immediately began to pray in English. Bob Jones said, “I have been in this way for a long time and you can’t fool me. That was of God and I knew it.” He went on to say that we may not fully understand this speaking in tongues, but when the Spirit of God moves he could recognize it….

Incidentally, about seven or eight students came to us to inform us they were Assemblies of God members. Two of them graduated with honor. I was called upon to speak in the Sunday morning Chapel service. I did not discern a particle of prejudice at any time, and the announcement was made publicly of my position in the Assemblies of God. Since my return home, I have contacted other young men and women who plan to attend Bob Jones College. I believe, from my own experience there, no attempt will be made to break down their Pentecostal testimony.

In fact, Brother J.L. Slay, a former C.B.I. student and now pastor of the Church of God in Cleveland [a Pentecostal church], told me that more students attend his church than any other church in town, and the college does not oppose them. We learned also that the Church of God Publishing House does practically all the printing for the college.

Thank you to the aptly-named Flower Pentecostal Heritage Center for the document these quotes are from. During my visit to Springfield, director Darrin Rodgers was a gracious host who even took the time to give me a tour of the facilities and showed me around town.