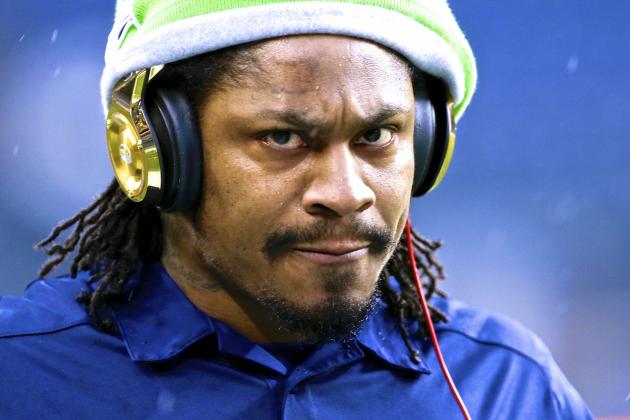 Although the Deflategate brouhaha has stolen most of the air out of the early media coverage of Super Bowl 49, Seattle Seahawks running back Marshawn Lynch still made headlines for his curious approach to the recent Super Bowl media day. For nearly five minutes he responded to every single question put to him with, “I’m just here so I don’t get fined.” This is not the first time Lynch only grudgingly cooperated with the NFL’s requirement that players make themselves available to the media. For the last several months he has been keeping the letter of the law while violating the spirit of it with gusto. He makes himself available to the media but answers questions unhelpfully. In past post-game conferences he’s responded with nothing but “Yeah,” and “Thanks for asking.” And Lynch only cooperated to that limited extent because the NFL fined him $100,000 for not speaking to the media at all.

Sports journalists have speculated about why Lynch is so reticent with the media. Perhaps it has to do with his upbringing in Oakland or maybe it’s his way of complaining about his contract. Perhaps it’s just a tacit “eff you” to sports journalism. He’s certainly gotten under the skin of some media members, although I suspect many welcome his silence because it makes their job–shoehorning athlete statements into click-worthy narratives–that much easier. They can write whatever they want; nothing is blanker than a blank slate! Yet the “why” of Lynch’s silence is less interesting than what it reveals about the NFL and ourselves.

Lynch is a modern-day, tatted, braided Bartleby. In Herman Melville’s 1853 short story an otherwise unremarkable clerk named Bartleby suddenly refuses to perform a simple task. He gives no explanation for his refusal, simply stating, “I would prefer not to.” Over time Bartleby stops doing any work at all and begins to live at the office. He turns down an offer of free housing with the same words, “I would prefer not to.” Bartleby’s employer, co-workers, and the narrator repeatedly try to persuade him to behave rationally, to act in his own self-interest, but he only responds again with “I would prefer not to.” Ultimately he is evicted and sent to jail, where he prefers not to eat and thus starves to death.

Literary scholar Allan Moore Emery suggested that Bartleby, the Scrivener: A Story of Wall Street was Herman Melville’s entry in a longstanding philosophical debate over the nature of free will. Puritan divine Jonathan Edwards and free-thinker Joseph Priestley, despite their differences in theology, had both argued a century before Melville’s story that free will only existed in “perfect isolation at any moment of decision.” To be truly free the will must separated from “emotions, habits, dispositions, and general behavioral principles.” Otherwise, the will was being determined by something other than the individual’s free choice. If Bartleby had done the job asked of him, taken the housing, or eaten the food he was offered, he would have fulfilled the expectations of others, not acted according to his own free will.

Melville, echoing Edwards and Priestley, used the story of Bartleby to reject the idea of free will. As a character Bartleby shows the ludicrous impossibility of a human being who is truly free from all external influence. Anyone who tried such a lifestyle would die like poor, brave Bartleby. Yet all human beings are prone to thinking that we do live freely. We think we freely choose what we read, watch, say, and even believe. Bartleby reminds us that it’s a sham, a fiction we tell ourselves that’s even more preposterous than Melville’s little story.

Marshawn Lynch is as inscrutable to us as Bartleby. Lynch would prefer not to speak to the media even when most players do. Speaking to the media pays dividends in greater exposure to the public, fatter endorsement deals, and, of course, not paying fines to the NFL. Lynch’s stonewalling is maddening precisely because it seems so irrational, so against his own self-interest.

Now Lynch doesn’t go so far as Bartleby. He’s still eating so far as I know. Mostly Skittles. Yet I’m not sure that we today have the philosophical chops to properly appreciate Lynch’s ongoing game of charades with the league. The NFL is a soulless conglomerate with a Borg-like focus on packaging spectacle for easily-awed audiences. Players are often treated like commodities to be admired, yes, but also to be used up and discarded once age sets in or injuries accumulate. Thanks to the hard fought gains of the NFL Players Association, it’s not nearly so bad as the NCAA’s treatment of “stoo-dent ath-o-letes,” but it’s on the same spectrum.

And Marshawn Lynch gums up the works of this whole machine of NFL glitz and media glamour. His noncompliance should make us take a step back. We should be questioning why we don’t find it strange that a sports league is forcing someone who carries footballs for a living to give boilerplate quotes to bored reporters writing fluffy, color-by-numbers articles. We should wonder about the petty authoritarianism of an organization that would fine Lynch half a million dollars for so small an act of defiance. And most importantly, we should wonder whether our society could tolerate the idea of Bartleby when we can’t even make space for Marshawn Lynch.