During World War I, German-Americans had endured a great deal of suspicion and legal persecution. Some states banned them from instructing their kids in German and/or forced them to attend public rather than their own parochial schools. The pressure very quickly turned petty; German cuisine was renamed such that sauerkraut was renamed “liberty cabbage” and “hot dog” became the new term for frankfurter. A majority of German-American immigrants were Lutheran, but their evangelical identity didn’t do much to protect them from their neighbors.

Even so, those cultural affinities die slowly and and you might be surprised by what replaces them. In January 1941 a Lutheran pastor in Virginia wrote to a radio station manager. The manager had previously asked the pastor, when speaking on the air, to use “negroes” instead of “darkies” or “colored people.”

One way for German-Americans to fit in was to adopt the dominant racial mores. White supremacy was a way of asserting American identity. Hey, I may be a cabbage-eating Kraut, but at least I’m white! The most extreme expression of this impulse was the German American Bund, the authorized American arm of the Nazi Party. Here’s an infamous picture from a 1939 Bund rally in Madison Square Garden which was attended by 22,000. 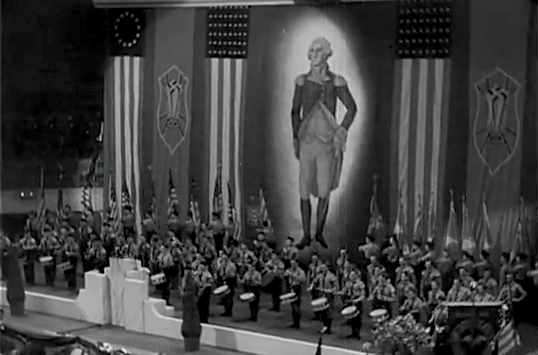 I don’t know if the pastor in the letter at hand was a Bund member. In any case, he replied to the manager that he would be more careful in the future and concluded with this line:

Living in a southern, pro-British, Rooseveltian atmosphere in itself makes me rather cautious. Behind all this dirty weather in the world the sun of Grace is still shining!

The pastor was an isolationist opposed to US intervention against Germany in World War II. He likely has in mind the pending Lend Lease Act, passed in March 1941, which would funnel military supplies to the British government on credit (before, the Brits had to pay cash, which they were running out of).

It reads strangely today, doesn’t it? I don’t think that’s just because he’s an isolationist, but because he represents a kind of nationalism which is alien to us. He’s writing in English which makes it likely he’s at least a second generation German-American. Yet his affinity for Germany (and antipathy for Britain) is affecting his views of US policy. He then cloaks that nationalism in religious language. The threat of American intervention is “dirty weather” covering up the “sun of Grace,” implying that God is on the German-American isolationist side.

I think moments like these are instructive for us today. I do not doubt that for this Lutheran pastor his hybridized national identity felt as natural as breathing. This should provoke us to reflect on how our own national and racial identities sub-consciously shape our attitudes, politics, and loyalties.