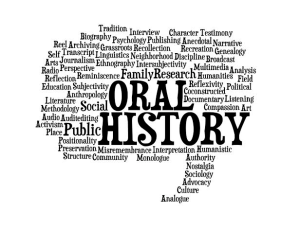 Historians are a strange lot. We sit in the archives and chuckle while reading a 19th century bon mot, shed a tear for the long-dead recipient of a love letter, and get angry over the machinations of politicians who haven’t won an election in decades or centuries. But not all history is done in dusty archives. 20th century historians often write about the living or at least those who remain in living memory. I have been reading Markku Ruotsila’s excellent new biography of Carl McIntire and was reminded of the incalculable value of oral history for modern historians. Ruotsila was able to interview McIntire’s son, members of his church, and other family and friends who helped Ruotsila fill in the gaps in the (substantial) documentary record left behind by McIntire. They also provide the pithy anecdotes that make a monograph more readable. (My grandfather, who served as a deacon in McIntire’s church, once said of his pastor that when it came to counting church membership McIntire had the gift of the Biblical prophet Elisha, who had a knack for inflating numbers.)

Unfortunately American historians who want to use oral history in their research face significant hurdles. Since 1991 oral history has been regulated as a kind of scientific research by the federal government. The goal of the regulations is to prevent the abuse of test subjects and there is indeed a long, sordid history of medical researchers taking advantage of marginalized communities. But while the rules make a great deal of sense when applied to actual scientists, there is an immense, qualitative difference between a pharmaceutical researcher testing new drugs on volunteers and a historian sitting down for an interview. 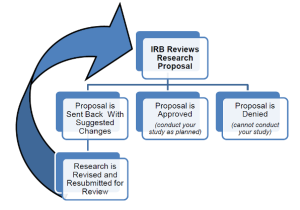 For the past two decades, oral historians have had to navigate a long, time-consuming, and red-tape laden process run by the Institutional Review Boards (IRBs) hosted at every major university. Thankfully, even under the old regime, oral history was generally exempted from IRB oversight. Even so, oral historians had to submit paperwork to their IRBs to receive an exemption, which often included release forms signed by interviewees and months spent waiting for the exemption to be approved.

Any time you raise the costs to do a kind of research, people will do less of it. It’s not rocket science, er, rocket history? Oral history still makes sense for certain projects for which there is relatively little documentary evidence and which involves events recent enough that many of the major participants are still alive. The process does, however, discourage historians looking to add an oral history element or two to their project while relying primarily on archival evidence for the bulk of their research. It was a problem for part-time oral historians.

I’ll proffer myself as an example. In examining the role of radio broadcasting in the rise of the New Christian Right, I argue that grassroots activists in the 1960s-70s were motivated to engage in politics by a steady diet of conservative radio shows hosted by the likes of Carl McIntire, Billy James Hargis, and Dan Smoot. As Michelle Nickerson has detailed, mid-twentieth century conservative activists were disproportionately middle-class women. They could afford to be housewives, they were educated, and, I argue, they could tune into Right-wing radio all day every day. When they turned the radio off, their activism started. Conservative women made such a ruckus starting book clubs, boycotting Communist-produced goods, picketing school boards, and going door-to-door for conservative political candidates that they show up in confidential White House memoranda during the Kennedy Administration. (Included in my dissertation! Cool, right?!) 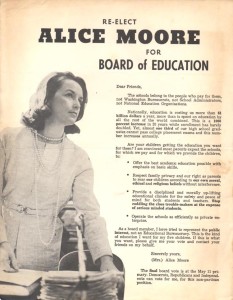 To bolster my argument, I sought an interview with Alice Moore, a West Virginia housewife who started a massive protest movement in Kanawha County in 1974 to oppose state-mandated curriculum standards. A few details in William Martin’s description of Moore’s story in his book With God on Our Side, made me wonder if Moore’s decision to engage in formal political activism was at least partly motivated by her consumption of conservative radio. If so, it would be a compelling connection between broadcasting and an episode widely regarded as a significant moment in the conservative counter-revolution. So I made contact with a friend of Alice Moore’s and began to work towards getting a formal interview with her.

However, when I started looking into the process for applying for an IRB exemption and realized how much effort would go into adding something that, while compelling, was not the core of my dissertation, I chickened out. As a time-crunched graduate student, it simply wasn’t worth adding an oral history element to my dissertation when I had plenty of documentary evidence at hand. I believe my project would have been stronger if I could have included Moore’s story. But even had an interview with Moore not helped my particular project, I would have given the interview record to an oral history archive, thus giving other historians a significant historical resource that could have been useful in areas beyond the scope of my own work.

So last month, when it was announced that the federal government was considering altering its regulations to exclude oral history from IRB oversight, I rejoiced as did many others in the field. So far as I know the federal government hasn’t acted yet, but that possibility is worth adding to our Thanksgiving lists.