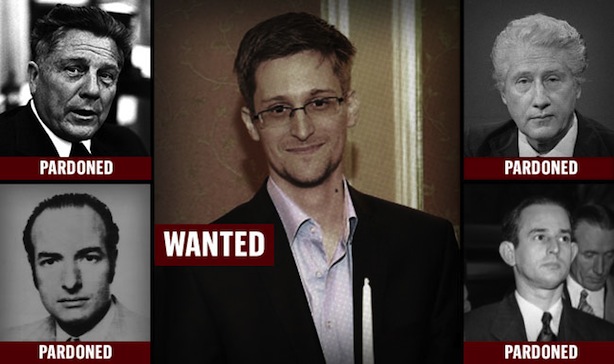 Back in 2013 I signed one of the White House’s “We the People” petitions calling for a “full, free, and absolute pardon for any crimes” committed by Edward Snowden relating to his “blowing the whistle on secret NSA surveillance programs.” I believe that in twenty years or so historians will draw a direct line between Snowden’s action and those of other famous, vindicated whistle-blowers like Daniel Ellsberg and the Media Eight.

This morning the White House responded to the petition. It was deeply disappointing. Here’s the statement from Lisa Monaco, Obama’s adviser on Homeland Security and Counterterrorism:

“Since taking office, President Obama has worked with Congress to secure appropriate reforms that balance the protection of civil liberties with the ability of national security professionals to secure information vital to keep Americans safe.

As the President said in announcing recent intelligence reforms, “We have to make some important decisions about how to protect ourselves and sustain our leadership in the world, while upholding the civil liberties and privacy protections that our ideals and our Constitution require.”

Instead of constructively addressing these issues, Mr. Snowden’s dangerous decision to steal and disclose classified information had severe consequences for the security of our country and the people who work day in and day out to protect it.

If he felt his actions were consistent with civil disobedience, then he should do what those who have taken issue with their own government do: Challenge it, speak out, engage in a constructive act of protest, and — importantly — accept the consequences of his actions. He should come home to the United States, and be judged by a jury of his peers — not hide behind the cover of an authoritarian regime. Right now, he’s running away from the consequences of his actions.

We live in a dangerous world. We continue to face grave security threats like terrorism, cyber-attacks, and nuclear proliferation that our intelligence community must have all the lawful tools it needs to address. The balance between our security and the civil liberties that our ideals and our Constitution require deserves robust debate and those who are willing to engage in it here at home.”

This is breathtakingly hypocritical logic. First, the government has offered no evidence that Snowden’s disclosures endangered any government operatives. Indeed, unlike the Wikileaks document dumps which did create real danger to American agents and foreign assets, Snowden and his friends at the Guardian have been very careful to not disclosure the names or identifying details of US agents. You can see that concern on Snowden’s mind if you watch the remarkable documentary Citizenfour.

Second, I’ll also note that accusations of endangerment are the routine response to every public scandal involving government overreach. Simply put, it is in the bureaucratic best interests of corrupt and power-hungry government officials to exaggerate the scope of the dangers associated with disclosure of government wrongdoing. It was true during the scandals involving the Nixon White House and the Vietnam War and remains true today. (In part that’s because the same cast of characters that concealed, lied, and blustered its way through the Congressional investigations of the 1970s–including Donald Rumsfeld and Dick Cheney–would later become the architects of the post-9/11 Patriot Act.)

Third, it relies on the assumption that anything that harms the US government is equivalent to harming the American people. It is a debatable proposition whether the leviathan that is the federal government truly governs by the people or for the people, but what is certain is that this logic has been employed against every major social movement in American history. For example, as Mary Dudziak points out in her book Cold War Civil Rights, civil rights activists faced criticism for undermining US moral authority during the nation’s standoff with the Soviet Union. Whenever MLK or Malcolm X compared US treatment of its minorities unfavorably to their treatment in Communist countries, why, they were aiding the enemy by parroting Communist propaganda! More moderate voices tempered that language while keeping the substance, arguing that racial equality could wait until after the Cold War had been won. (I like Nina Simone’s response to this “go slow” logic.) Replace “civil rights” with “civil liberties” and “Communism” with “terrorism” and you have the current rhetorical backlash against Snowden in a nutshell.

Pause and consider that the Obama administration is echoing the logic of the white supremacists who murdered, bombed, and intimidated in order to try and prevent someone like President Obama from ever holding that office.

Fourth, the statement criticizes Snowden for hiding “behind the cover of an authoritarian regime” yet fails to mention that Snowden was stranded in the Moscow airport because of the White House. The administration placed pressure on its allies and recipients of US foreign aid (read: almost everybody) to deny asylum to Snowden. It’s not like Snowden said, “Hmmm, which country do I want to live in exile in? Oh, Russia, it’s perfect! I love me some borscht!” Snowden applied to at least half a dozen different (and less authoritarian) regimes but each bowed under pressure from the Obama administration. Take for example the moment when the US strongarmed the Portuguese government into denying fuel to the President of Bolivia’s plane because of a rumor that Snowden was aboard. Can you imagine the fireworks that would ensue if another nation did that to Air Force One? The White House actively hemmed Snowden in, giving him no realistic option except residence in Russia, and then used his presence in Russia to dismiss Snowden’s loyalty to America. That phrase from the White House statement is audaciously mendacious.

Fifth, Snowden has been vindicated at least in part by the actions of all three branches of government, including Obama’s executive overhaul of the NSA’s rules in 2014, Congress’s revisions to parts of the Patriot Act in 2015, and the Second Circuit Court of Appeals recent ruling against bulk collection of metadata. It’s rich that the Obama administration was willing to acknowledge that the NSA overreached its authority, but now refuses to call Snowden a whistle-blower.

Finally, allow me to introduce you to a certain presidential candidate from 2007. He had a few things to say about illegal wiretapping and NSA overreach. If only we’d elected this guy! What a missed opportunity.