I just returned from the Iowa Conference on Presidential Politics (ICPP) hosted by Dordt College in far northwestern Iowa. For an inaugural effort, the academic side of the conference went quite smoothly thanks to the efficiency and hospitality of Liz Moss and Jeff Taylor. I particularly enjoyed hearing Daniel K. Williams present a portion of his soon to be published history of the pro-life movement. My own paper, “The Reuther Memorandum: How the Kennedy Brothers Muted Conservative Radio Broadcasting in the 1960s,” went off without much of a hitch and the discussion afterwards helped me think through how I’m framing my arguments about the origins of the New Right. 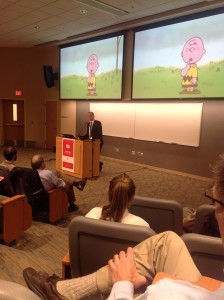 On the first night, Laurence Lessig spoke to the group about the need for public funding of elections in order to combat congressional corruption. I’m not sure I buy into his proposed solution, but I will say that if every candidate were as thoughtful as Lessig the level of political discourse in America would be greatly elevated. Pity the Democratic Party wouldn’t let him on the debate platform. In any case, I solemnly vow to seriously consider voting for any politician who prefaces his stump speech about fixing American government with the line, “I don’t think we can.” (As of November 2, you can no longer hold me to that promise since Lessig just dropped out of the race. I’m going to assume it was our fault.)

Rick Santorum spoke the next night. He’s taller in person than he seems on camera and he’s quite good at retail politics, especially his repartee with questioners. He did not, however, seem to appreciate the question I asked him: “Senator Santorum, I’ve read some of your remarks on the immigration question and found the story of your grandfather quite compelling. He was an unskilled laborer, Catholic, and Italian and I think we’d all agree America was better off for his decision to bring the Santorum clan to the United States (although your primary opponents might still think the jury is out on the matter). Why don’t you then favor increasing the flow of legal immigrants into the United States by getting rid of national quotas and work visa requirements? Why not give the Sanchezes the same opportunity as the Santorums?”

His response was that no, he didn’t favor increased immigration. America needed workers in the early 20th century but not today. Immigrants today were taking jobs away from native-born Americans. Furthermore, he argued, there was no welfare state in place in the 1920s and thus incoming workers were not a drain on public finances as they are today. I wasn’t in a position to respond, of course–the guy in front of the room always has the conversational advantage–but if I could have responded I would’ve noted that he was parroting nativist arguments from a century ago even while explicitly denying that he was a nativist.

While the entertainment value of having political candidates perform for a bunch of skeptical academics is its own reward, I think there’s a real benefit to blending academic conference and campaign stop. Without intending to, the candidates illustrated some of the themes under consideration in the plenary sessions and panels. For example, Andrew Bacevich spoke about the catastrophic failures involved in the US maintaining Cold War foreign and military policy in the post-Cold War era. He mooted that if he could ask only two questions of each presidential candidate it would be, first, what they believed the lessons of the US’s wars in Libya, Afghanistan, and Iraq were and, second, how those lessons would shape their policies as the next President.

And during the Q&A with Rick Santorum one of the conference attendees asked him to respond to Bacevich’s questions from the night before. Santorum’s answers evinced the very mindset which Bacevich had criticized in his address. The episode illustrates the kind of fortuitous cross-penetration facilitated by holding a conference in Iowa during campaign season.