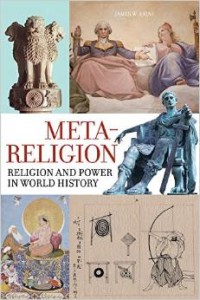 James W. Laine addressed one of last week’s plenary sessions at the American Society of Church History conference. Laine, whose work on the Mughal Empire was provocative enough to get him banned in parts of India, spoke on the concept of “meta-religion,” an idea coined in his latest book.

If I can ludicrously generalize, meta-religion is a totalizing system that accommodates and/or subsumes individual religions, which are tolerated so long as they do not challenge the power of the empire backing the meta-religion. Laine gave the Roman Empire, the Mughal Empire, and the United States as examples, making the point that secularism and civil religion are much-ballyhooed modern variations on a far older concept.

French secularism (laïcité) received honorable mention as an example of how meta-religion remains invisible until a subordinate religious group resists the State. When a group does so, the meta-religion becomes rigid and thus visible, as has been apparent since the passage of restrictions on Islamic practice like the ban on headscarves in primary schools. I wrote down one of Laine’s punchier lines: “As America debated the extent of separation between church and state, France embarked on the even more radical experiment of replacing the Church with the State.” 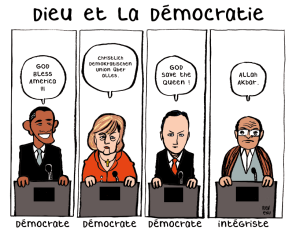 For non-French speakers: “Integriste” is an epithet in France and the cartoon shows how unevenly it’s applied despite the basically identical meaning of the captions.

During the Q&A Laine poked at the audience’s discomfort with conservative challenges to American secularism. Battles over, for example, teaching creationism in public schools are evidences of the rub between an older and a newer American meta-religion. The Protestant consensus of the 19th century is being replaced by a progressive system which is yet equally imbued with faith. After all, Laine noted, the ACLU sides with opponents of creationism in the interests of the separation of church and state. Yet it doesn’t return the favor when a Christian family complains about yoga classes in their public school. When Laine gave that example, the audience chuckled and shifted uncomfortably.

I’d recommend Laine’s book to anybody with an interest in religion and I plan on picking up a copy myself. As an Americanist, I’ll be mentioning it in the same breath as Robert Bellah’s work. As a Christian, it will change how I conceptualize the relationship of the early Church and Rome.